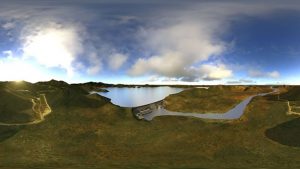 The series focuses on the “water politics” of the river Nile, looking at how the new Ethiopian Renaissance Dam project threatens to upset the balance of power between Egypt, Ethiopia and Sudan.

Damming The Nile VR is in full immersive VR, is stereoscopic and features spatialised audio, and will be accessible through the BBC’s new dedicated VR page.

The series can be watched on Samsung Gear VR headsets or Google Cardboard viewers via YouTube, while a 360° version is available through the BBC News website and on Facebook.

It will also feature on the new BBC VR app, which launches today on the Oculus Gear VR store.

“Damming the Nile VR does this by making you feel like you’re there, unearthing the story as you go, and getting a better understanding of the different cultures and points of view at play.

“Audiences can also enjoy the sheer scale and beauty of the Nile, alongside the major infrastructure projects that have shaped its past and will continue to shape its future.”