US set-top box start-up, Caavo, has launched the first 5,000 units of its unified home entertainment box. 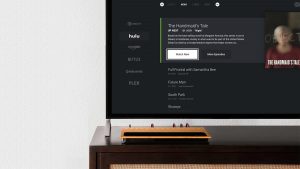 The device was built with a vision of “simplifying TV”. It connects different TV inputs and services – including live TV, DVR and streaming apps – and offers universal search across them.

The box has a voice-enabled remote, is compatible with Amazon Echo or Dot devices, works with 4K TVs but is not HDR compatible, and is available in the US for US$399.

“With Caavo, everyone has access to all the amazing content they already pay for, regardless of where it lives. Ultimately, this creates more choice and the freedom to watch TV the way you want,” said the company in a blog post.

Last year Caavo closed a US$17.5 million round of Series B funding from backers including Time Warner Investments and Lauder Partners. Caavo’s other backers include Sky, which invested US$2 million in 2016 when the company was still a stealth startup.

Caavo was co-founded in 2015 by late Slingbox founder Blake Krikorian and tech veterans Andrew Einaudi, Ashish Aggarwal and Vinod Gopinath. Einaudi is company CEO and previously worked at Microsoft on the Xbox team that launched the Xbox One.

Krikorian died unexpectedly in 2016 aged 48. He first developed the Slingbox TV streaming media device with his brother Jason Krikorian in 2002 and sold the business to Echostar in 2007.