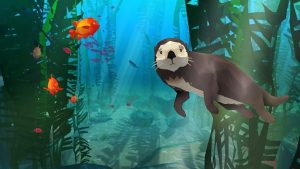 BBC Earth: Life in VR was created by game studio Preloaded in collaboration with BBC Studio’s VR team, and is available on Google’s Daydream VR platform.

“We are really excited to be working with Google to bring BBC nature content to Daydream,” said Bradley Crooks, head of digital entertainment and games, BBC Worldwide.

“VR allows us to provide our audiences a new level of immersion unparalleled by other mediums and tell stories of the natural world in a new and exhilarating way.”

Kellee Santiago, senior producer for Daydream Apps, said: “BBC Earth’s experience on Daydream makes exploring the wonders of our world more immersive and accessible than ever before.

“It allows audiences to guide themselves, based on whatever takes their interest. The experience truly showcases the unique capabilities of the interactive and immersive format of Daydream to provide a platform for deeper understandings of our world.”

BBC Earth: Life in VR is the result of a partnership between Google and BBC’s commercial arm BBC Worldwide, which published the title as an app on the Google Play store.

The BBC launched its virtual reality production studio, BBC VR Hub, in December in a bid to explore “how VR can create real audience impact”.

Head of commissioning for VR Hub, Zillah Watson, said at the time that the new unit will work closely with BBC programme makers and digital experts to create VR content across a range of genres.

The BBC has worked on a number of VR projects since 2016, including: Home – A VR Spacewalk, We Wait, and Easter Rising: Voice of a Rebel.