The Russian pay TV market grew by 250,000 subscribers in the fourth quarter of 2017, according to stats from research firm TelecomDaily. 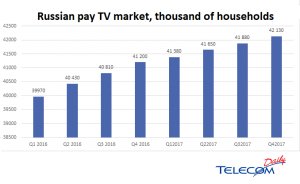 The agency claimed that the pay TV market has “stagnated in Russia” with the number of subscribers growing by less than a million in 2017 for the first time in several years.

TelecomDaily said that there were 42.13 million pay TV subscribers in Russia at the end of December after annual growth of about 930,000 subscribers. This amounted to pay TV penetration of 75%.

“The pay TV market in Russia is saturated. That’s why growth rates of operators’ businesses are so small,” said Denis Kuskov, head of the TelecomDaily agency.

“Operators are trying to enlarge ARPU by additional services. Satellite operators are very active in Russia, but 75% of new contracts in 2017 were concluded by fiber-optic companies.”

Cable was the most popular pay TV delivery method in Russia last year, accounting for 43% of subscribers, followed by satellite at 39% and IPTV at 18%, according to the research. However, IPTV was found to be the fastest growing technology.

At the end of 2017 average revenue per user amounted to R170 (€2.45), up from R155 in the previous year due to the development of additional services by operators, according to the research.