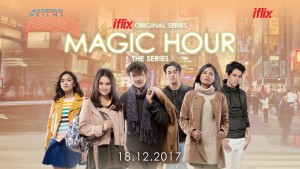 The eight-episode show, Magic Hour: The Series, will launch on Monday, with all episodes available for viewing immediately.

Magic Hour: The Series is made by Screenplay Films and is a sequel to a 2015 Indonesian box-office hit of the same name. The show was made by the team that made the original movie – director Asep Kusidinar and writer Titi Sari.

“We are proud to present our very first iflix Original Series in Indonesia, co-produced with Screenplay Films as the beginning of our multi-year collaboration. Magic Hour: The Series, a drama about loyalty and unexpected love, is a testament to our commitment to provide the best of Indonesian content to our members across Indonesia. Fans of local content can expect many more of our original Series to come on our service in the upcoming months,” said Iflix’s Indonesia country manager, Matthew Collier.

Indonesia, one of South-East Asia’s most populous countries, is a key market for Iflix and other SVOD players.

Global rival Netflix experienced a rocky entry into the Indonesian market in January last year. The service was blocked by state telco Telkom after local authorities condemned a lack of compliance with local censorship rules and business regulations.

Netflix subsequently struck an agreement with Telkom in April 2016 after agreeing to abide by local rules.