Amazon and Netflix to drive OTT revenues to $120bn

SVOD giants Amazon and Netflix will be at the centre of an explosion in revenues in OTT services and platforms over the next five years, new data predicts. 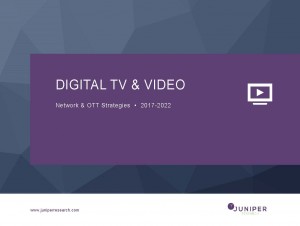 OTT revenues will surge from US$64 billion (€54 billion) in 2017 to US$120 billion in 2022, with a quarter of households globally subscribing to an SVOD service by that point, a study from Juniper Research suggests.

With Netflix due to spend more than US$6 billion on content this year, with more pledged for next, traditional broadcasters are falling behind in terms of investment, the Digital TV & Video: Network and OTT Strategies 2017-22 report noted.

However, this dominance could only continue if investment goes into original programming and not on back catalogue content, it added.

“Success will hinge on whether these providers can continue to produce hits like Stranger Things [pictured],“ said report author Lauren Foye. “As consumers become more fluid in their uptake and loyalty to video services, OTT could just as easily see users switch off.”

The news comes soon after another analyst, Digital TV Research, predicted combined pay TV and OTT revenues would near US$300 billion by 2022.

Juniper also used its research paper to throw its weight behind the growing belief that Amazon will bid for English Premier League football rights in February next year. Linear pay TV services have traditionally been the buyer of such rights.

On a more positive note for traditional networks, Juniper found regional OTT services such as iFlix “do not offer the same granular level of local coverage that broadcasters can offer”.