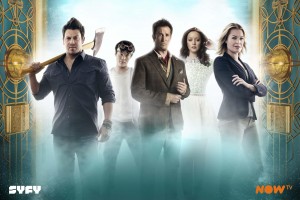 From this week Syfy will be available as part of Now TV’s Entertainment Pass, both as a live channel and as an on-demand offering.

At launch viewers will be able to access boxsets of series like The Librarians, Killjoys, Hunters and Dark Matter as well as live-streams of sci-fi movies like Daredevil, 12 Monkeys and Pitch Black.

“From space adventures to the supernatural, with Syfy now available to stream on Now TV there’s a whole new universe of sci-fi content to be explored on your Entertainment Pass,” said Paul Sweeney, sales and marketing director at Now TV.

Lee Raftery, MD UK and emerging markets at NBCUniversal International Networks said: “Science fiction fans – the wait is over! We couldn’t be more excited about launching Syfy on Now TV, bringing the brand – and its compelling range of sci-fi and fantasy content – to even more viewers.”

The Now TV Entertainment pass costs £7.99 per-month and features content from a range of pay channels, including Sky One, Sky Atlantic, Fox, Viceland and Discovery.