Ericsson: half of TV and video viewing will be mobile by 2020

By as early as 2020 half of all TV and video viewing will be done on a mobile screen, due to an increasing consumer preference for on-demand and catch-up TV over linear viewing. 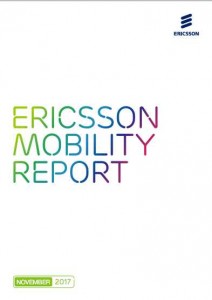 This is according to Ericsson’s latest Mobility Report, which claims that mobile video traffic will grow by around 50% annually through 2023 to account for 75% of all mobile data traffic.

The November 2017 study said that higher resolution video streaming could impact data traffic consumption “to a high degree”, thanks to new applications and changes in consumer behaviour.

“Watching HD video (1080p) rather than video at a standard resolution (480p) typically increases the data traffic volume by around four times,” said the report.

“An emerging trend with increased streaming of immersive video formats, such as 360° video, would also impact data traffic consumption. For example, a YouTube 360° video consumes four to five times as much bandwidth as a normal YouTube video at the same resolution.”

Ericsson said that social networking – the second most popular use-category of mobile traffic after video – will increase by 34% over the next six years. However, its relative share of traffic will decline from 12% in 2017 to around 8% in 2023, as a result of the stronger growth of video.

Overall, mobile data traffic is expected to surge eight-fold over the forecast period, reaching 110 Exabytes per month by 2023 – the equivalent of 5.5 million years of HD video streaming.

“Video consumption continues to fuel mobile broadband traffic growth,” according to Ericsson. “The driving force behind video’s uptrend are the young millennials – those in the 15 to 24 age bracket – who stream 2.5-times more than those over 45 years of age.”

The forecast claims that there will 1 billion 5G mobile broadband subscriptions by 2023, with 5G set to cover more than 20% of the global population six years from now.