Pay TV revenues in Spain increased by 15% year-on-year in the first quarter of the year to €520.7 million, driven by continued strong take-up of multi-play services, according to data compiled by regulator the Comisión Nacional de los Mercados y la Competencía (CNMC).

According to the regulator, 86% of pay TV subscribers in Spain took a bundled offering. Quintuple-play packages saw the biggest growth, Some 4.9 million pay TV homes now take quint-play services comprising pay TV, fixed phone, mobile phone, and fixed and mobile internet offerings, up 99,000 on the previous quarter. Quint-play services have grown from a base of only 200,000 four years ago.

According to the CNMC, there were 6.09 million pay TV subscribers in Spain at the end of the first quarter, up by 31,000 on the previous quarter. 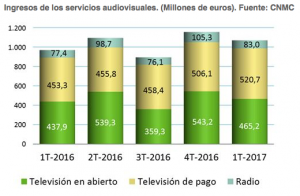 Atresmedia turned in the biggest ad revenues for the quarter, taking a 45.5% share against rival Mediaset’s 43%. Public broadcaster channels took 5.8% of the advertising pie.

Digital-terrestrial TV accounted for 77.2% of viewing in the quarter, compared with 19.9% for fixed-line distributors and 2.9% for satellite.