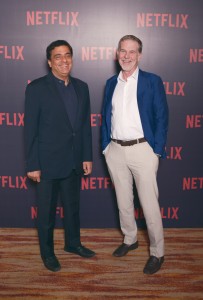 Love Per Square Foot is the first mainstream production from India that Netflix will launch internationally, and comes as rival Amazon continues to pour money into original content from the Asian territory.

While the film will launch in 190 Netflix operating territories, it is notable as a major production from Screwvala, who left his job at The Walt Disney Company four years ago but remains a key entertainment force in India.

“How, where and when great stories are watched is changing everyday,” said Screwvala. “Our younger audiences chose their mediums. We love to disrupt and innovate in this space and this is a first of its kind for South Asia.”

Netflix CEO Reed Hastings (pictured above with Screwvala) said Love Per Square Foot was “a gem that we’re proud to have on the service”, and described RSVP as “a visionary partner”.

The film, which Still and Still Pictures is coproducing, follows a couple who enter into a marriage of convenience in order to buy a flat in their favourite city, Mumbai.