Virtual and augmented reality startups have raised US$2.5 billion (€2.09 billion) so far this year, equaling the record for AR/VR investment in a single 12 month period more than a month before the end of 2017. 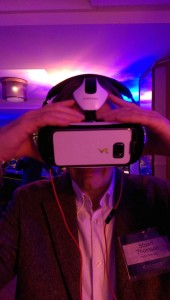 This is according to Digi-Capital’s Augmented / Virtual Reality Report and Deals Database, which claims that, by sector, a third of all investments went into AR/VR tech with just under a quarter going towards smart glasses, primarily due to the company Magic Leap.

“Games took more than US$1 of every US$10 raised, with AR/VR navigation, photo/video, peripherals, entertainment and social startups also raising significant amounts,” according to the report.

Digi-Capital said that companies in the AR/VR space have already raised US$1bn in the fourth quarter of this year – only the second time the billion dollar figure has been reached in a single quarter.

This is thanks to secretive AR firm Magic Leap raising US$502 million in in Series D equity funding last month, and Pokemon Go studio Niantic’s new raise of US$200 million.