In the US, the number of subscriptions to online video services will more than double the pay TV total by 2022, according to Ovum stats. 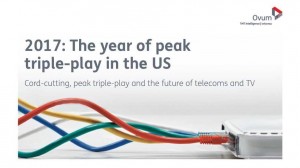 The research firm’s new report, titled ‘2017: The year of peak triple-play in the US’, claims that online video subscription figures will reach 213.1 million in 2022 as pay TV subscriber numbers continue to decline.

The report predicts that online subscriptions will be split between 130.4 million for Netflix-style subscription video-on-demand services and 82.7 million subscriptions for linear online video services – like DirecTV Now, Amazon Channels and YouTube TV.

Combined with ‘cord nevers’, households that are not interested in taking pay TV in the first place, Ovum predicts US pay TV penetration of homes will fall from 81.7% in 2014 to 71.9% in 2022.

The report attributed this to consumers, tired of paying high fees for hundreds of TV channels they never watch, opting to use lower-priced online-only services instead.

“The US pay TV market has been saturated for a very long time,” according to the report. “With few potential first-time customers to target, operators have focused on increasing subscription fees to grow revenue, which has led to triple-play prices reaching as high as US$145 per month. In many ways, the only way is down – or at best flat.”