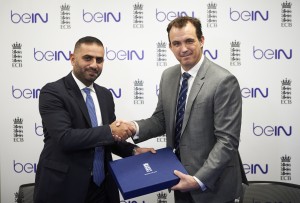 Yousef Al-Obaidly and Tony Harrison, CEO of the ECB

BeIN Media Group has secured exclusive rights to broadcast England & Wales Cricket Board (ECB) content in the MENA region and will launch a dedicated cricket channel next year.

The Qatar-based pay TV operator, which has been under pressure of late because of the regional boycott of Qatar by a number of neighbouring states, has struck a six-year deal with the ECB that will see it screen premium cricket clashes including India’s 2018 and 2022 tours to England, as well as the Ashes series in the UK in 2019.

Under the deal, the pay TV operator will also screen selected matches from ECB’s domestic programme including action from the T20 Blast, Royal London One-Day Cup and the Specsavers County Championship – as well as ECB’s new eight-team T20 competition from 2020.

The agreement will over the home international programme for both England’s men’s and women’s teams across all three formats of the game. All ECB games will be available in HD via subscription channels and online. BeIN Media said some matches would be screened on its recently-launched 4K UHD channel.

The group said it would broadcast cricket in over 24 countries, including the UAE, Saudi Arabia, Bahrain, Oman, Kuwait, Qatar, Lebanon, Iraq, Egypt and Morocco.

beIN Media last week announced an exclusive deal to broadcast  Cricket Australia content in the MENA region, starting with the 2017-18 Ashes from today.

“We are thrilled to partner with the ECB at such an exciting time for English cricket, building on a similar agreement signed this month with Cricket Australia. Together, these acquisitions and the upcoming launch of our dedicated cricket channel will deliver high quality, in-depth cricket coverage to the rapidly growing audience in the MENA region. These agreements are the latest in our ambitious plans to deliver more sports coverage across the region and further enhance our position as the undisputed first choice sports and entertainment broadcaster.”