TV channels that run from the UK but broadcast into Europe will likely have to decide in the first half of next year whether to move their operations due to Brexit uncertainties, warned COBA executive director Adam Minns. 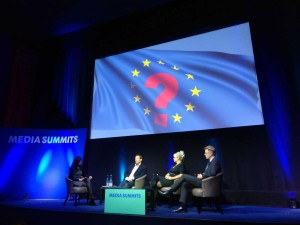 Speaking at the Media Summits Brexit Briefing in London last night, Minns raised doubts about the UK’s ongoing status as Europe’s leading broadcasting hub if agreements are not put into place to ensure European broadcasters can continue to be licensed in the UK and access the EU market post-Brexit.

“At the moment we really need either phase two talks to start and some idea if there is going to be a free trade agreement that includes broadcasting, or probably more realistically talks about a transitional arrangement to start,” said Minns.

“We need clarity that that will be a status quo arrangement that will include broadcasting. If that happens I think that will calm things down, people will make a more measured decision. But otherwise it’s not just staff relocation, it’s your investment and infrastructure and facilities that you’ve got to look at.”

Minns would not comment on whether brodcasters are already starting to put contingency plans in place. However, he said that considereing Brexit is due to happen in March 2019, “If we’re still running around in the dark by January, I would expect people to start having to make decisions in the first half of next year.”

According to European Audiovisual Observatory data, cited by Minns, some 1,400 TV channels are licensed in the UK by broadcast regulator Ofcom. Of these, 750 are broadcast into the EU.

This means that roughly a third of all channels licensed across the EU are located in the UK, attracted by factors like the UK’s creative skills, production sector and broadcast infrastructure.

Speaking at the same event, Conservative MP and former minister of state for culture and digital economy, Ed Vaizey, said: “It’s not surprising that people are hedging now. If people are opening offices in Amsterdam or Berlin or Paris, that’s perfectly understandable.” However, he urged media companies not to get ahead of themselves by moving entirely out of the UK.

“I think that I would balance clarity versus what you already know about the UK, which is this is where a lot of talent and creativity already resides and people have a lot of investments,” said Vaizey.

PACT’s director of international strategy, Dawn McCarthy-Simpson, claimed that while there has been a lot of “doom and gloom” about Brexit, her discussions with European broadcasters indicate that programme sales will not be adversely impacted by the UK’s departure from the European Union.

“We don’t know what the agreement will be, but we will still be selling into Europe,” said McCarthy-Simpson, who works for the trade association that represents and promotes the commercial interests of independent TV and film companies in the UK.

“I just spent the whole of this summer going around meeting broadcasters in Sweden, in Finland, in Germany, and they hardly mention the B-word. It’s not really part of their consideration. As far as they’re concerned, they need to get eyeballs watching great programmes and they think the Brits do it really well.”

COBA is the Commercial Broadcasters Association, a trade body for UK multichannel broadcasters and on-demand services. It represents members including A+E, Discovery, Fox, NBCUniversal and Scripps.