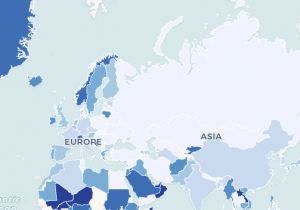 A study by BDRC Continental and Cable.co.uk has revealed vast disparities in the pricing of broadband access services worldwide.

According to the study, based on analysis of 3,351 individual broadband packages from across the world in the eight-week period up to October 12 this year, revealed that Iran offers the cheapest broadband with an average monthly cost of US$5.37 (€4.57), while Burkina Faso is the most expensive, with an average of US$954.54.

Ukraine and Russia were the second and third cheapest countries overall, with average prices of US$5.52 and US$9.82 respectively.

Syria was the cheapest Middle Eastern country for broadband, with an average price of US$12.15, making it ranked fifth overall. Other countries in the region were at the expensive end of the spectrum, with broadband in Saudi Arabia costing US$84.03 and broadband in the UAE averaging US$155.17.

Huge variations within regions were also visible in Central America and the Caribbean. Africa was meanwhile the most expensive region as a whole, with Namibia, Zimbabwe and Mali joining Burkina Faso in the top 10 most expensive countries.