There were no big surprises in Parrot Analytics’ list of the most ‘in-demand’ digital originals in the United Arab Emirates for the week from November 13-19, with Stranger Things topping a Netflix-dominated list. 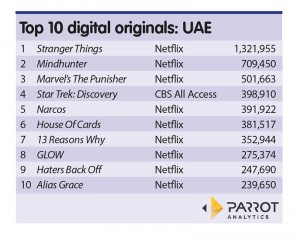 New release Marvel’s The Punisher took the number three slot in the listing with just over half a million in-demand expressions.

The only non-Netflix title in the listing, number four-placed Star Trek: Discovery from CBS All Access, is distributed by Netflix outside the US.

The other titles in the UAE list for the week ending November 19 were Narcos, House of Cards, 13 Reasons Why, GLOW, Haters Back Off and Alias Grace.