Only 1% of European TV pay TV subscribers are currently using Android OS-powered set-top boxes, according to research by Dataxis, with about 40 pay TV service worldwide having deployed Android TV-based platforms through the third quarter. 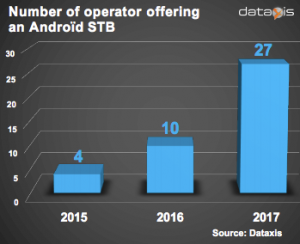 Despite the relatively now numbers, the research group believes that Android TV will gain traction both with operators and as a retail proposition, pointing out that two thirds of the operators deploying Android services have only started this year. It cited the example of Rostelecom, which has recently announced a tender for the supply of one million Android set-tops.

The Asia Pacific is the leading market for Android TV set-tops currently, accounting for 44% of the global total, with Europe accounting for 37%, according to Dataxis’s numbers.

In the retail environment, Dataxis said that many consumers had found ways to use Android TV boxes to access pirated content, citing Federation Against Copyright Theft figures that over one million Android OS boxes had been sold at retail in the UK market over the last two years, with 25% of users admitting to using them to access pirated content.