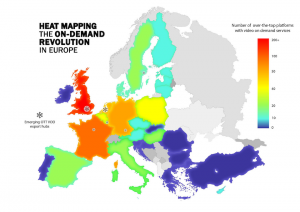 The UK has emerged as “the leading European OTT hub”, playing host to 226 over-the-top services, of which 82 are targeted abroad.

This is according to new research by content services company TVT Media, which claims that the UK has double the number of over-the-top platforms than any other EU nation targeted outside its country of origin.

Discovery Communications Europe, Modern Times Group, Walt Disney Company and Playboy TV all have over 10 OTT services targeting various EU countries but originating from a single platform in the UK, according to the report.

Amazon Instant Video and parts of the Sony group, also have OTT VOD services going to mainland Europe through a single licensed platform based in the UK.

The Netherlands was found to be a major European OTT hub with 51 OTT platforms, 18 of which target external markets – including includes the European base for Netflix, which serves as a hub for 37 separate platforms across the region.

“It is very clear that OTT is the driver behind VOD growth, but its development is still closely tied to high-speed broadband availability and the infrastructure of pioneering internet markets – reflected by the fact the UK and Netherlands have proven so adept at attracting OTT service providers,” said Ian Brotherston, chief executive of TVT Media.

“What is evident is that OTT is a major disruptive force that is changing the way service providers view their operations. The need to be physically located in a particular country is no longer a fundamental requirement. The internet has released content from geographic constraints and the future is likely to see more broadcasters, studios and other content owners following the model of leading innovators by delivering services via multinational platforms.”