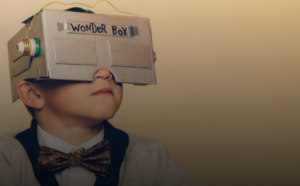 Google’s head of AR and VR strategy, Steven Kan, believes we are on “multi-year, I would argue multi-decade journey” in understanding how we can use these new technologies.

Speaking at Mindshare’s Huddle event in London yesterday, San Francisco-based Kan claimed that virtual and augmented reality will be the next evolution in computing, following the rise of mobile.

However, in terms of storytelling in VR, he said the visual language and the ways in which the technology can be harnessed effectively are still being worked out.

“As I talk to people in the industry that are working on VR storytelling, there is simultaneously a lot of excitement and also a lot of frustration,” said Kan

“The frustration is because truthfully we don’t actually know yet how to use these technologies to tell stories. We as creators, but also we as viewers, don’t know how to interpret these things.”

In 2D filmmaking a visual language has developed over time. Kan used the example of the opening scene of Saving Private Ryan to demonstrate how incredible impact can be created from a range of techniques – including sound, camera angles, edits and the use of the camera shutter.

While the VR equivalent may not yet exist, Kan argued that there is a lot that an audience will be able to easily learn and adapt to – in the same way that TV audiences have come to understand that an exterior shot of a building, followed by a scene of people talking in a room, roots the action in that location.

“These [VR and AR] technologies are incredibly powerful and they have incredible potential. We, especially myself and people who are in this industry, are also incredibly inpatient to be able to use them and to deliver on all of the value and promise that we can see,” said Kan.

Discussing the early use-cases of VR, Kan claimed that VR or 360 video, in terms of time spent, is “the most common or popular activity”, followed by gaming in second place.

Kan concluded his talk by saying: “It [VR and AR] is a great area for all of us to be investing in, playing in, learning in and training in, because I believe it will be a medium that will continue to fuel innovation and powerful moments and powerful experiences for many years to come.”