Sharknado studio backs streaming service for the end of days 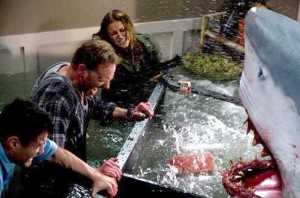 US-based OTT TV channels provider TV4 Entertainment and The Asylum, the movies studio behind Sharknado and Z Nation, have teamed up to develop a new streaming service dedicated to apocalypse-themed movies and series.

The service, named simply Apocaplyse, will initially be available in the North American market. It will showcase content from The Asylum’s library of movies including 2 Headed Shark Attack, Airplane vs. Volcano, Snakes on a Train and Transmorphers.

From next year, TV4 Entertainment and The Asylum will produce exclusive scripted and unscripted original content for the for the service.

Apocalypse will be priced at US$6.66 a month, with an introductory discount of 10%, or US$49.99 a year. The service will be available via the web, iPhone, iPad, Apple TV, all Android devices, and Chromecast, Roku, and Fire TV.

“We have always believed that the fans of the high-concept films and television series we produced and acquired over the last twenty years could support a dedicated channel to the genre. We are proud to work with TV4 Entertainment to bring that vision to reality, and to faithfully service this loyal fan base through Apocalypse,” said David Rimawi, Partner, The Asylum.

“Fans of the disaster genre are a passionate, global community long ignored by traditional television. No one does disaster like the team at The Asylum, and with a deep library of hits that came long before the world obsession Sharknado, they are our perfect partner for Apocalypse,” said Jon Cody, Founder/CEO, TV4 Entertainment.