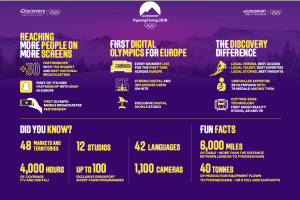 Eurosport has unveiled plans for what it claims will be the first “fully digital” Olympics for Europe, the PyeongChang 2018 Winter Games.

The Discovery-owned broadcaster said that it will make more than 4,000 hours of coverage available across devices on its Eurosport Player service – spanning 100 events and including 900 hours of live action.

Eurosport has a partnership in place with Snap to offer user-generated and behind-the-scenes content from PyeongChang to Snapchat users in Europe.

It also plans to work with some of Europe’s “biggest digital influencers”, embedding them into Eurosport’s digital teams to co-create social content aimed at young viewers – an ‘Olympic Games first’ for Europe.

On the technology front, Eurosport said it will use the latest production tech to bring fans closer to the action and will use more than 1,100 cameras to capture the Games.

The broadcaster will also use a new ‘Eurosport Cube’ studio to offer analysis and explanations of the action via augmented reality and enhanced data.

“We want to redefine the Olympic Games experience for the viewer with immersive storytelling, unrivalled expert talent and an all-screen strategy reaching new and younger audiences.

“We know that viewers want more: more access to their local heroes, more expertise and more ways to watch the Olympic Games, and this is exactly what we are bringing to fans across Europe.”