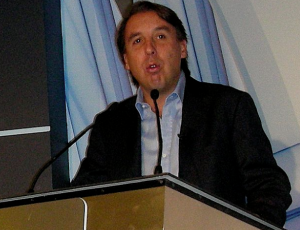 Emilio Azcárraga Jean is exiting his role as CEO of Mexican TV giant Televisa, with Bernando Gomez and Alfonso de Angoitia replacing him.

The changes take effect on January 1, 2018, with Gomez and de Angoitia become co-chief executives at the company, which is the largest provided of Spanish-language content on the international market but has experienced programming and advertising revenue issues.

Grupo Televisa noted both Gomez and de Angoitia were “instrumental” in implementing a 1997 capital restructuring that saw Azcárraga Jean become CEO, at which point the company returned to profitability after a rocky period.

Gomez joined in 1998 and is currently executive VP, while do Angoitia joined in 1999 and is also EVP, having previously been been CFO.

The pair were also key players in programme licence renewal negotiations with US Hispanic network Univision, which leans heavily on Televisa for its content offer; the acquisition of cable operations; and moves to diversify revenue streams away from the traditional advertising models.

“Our industry is undergoing a massive transformation, presenting us with big challenges, but even bigger opportunities,” said Azcárraga Jean. “For over two decades, and through some critical business moments, Bernardo and Alfonso have been driven and passionate executives who have outgrown their current roles at the company.

“Their new leadership roles will allow me to focus on the company’s long-term strategy. I have tremendous faith in their capabilities and I am confident that Televisa will continue to strengthen its presence as one of Mexico’s fastest growing telecom providers and as the leading Spanish-language content producer worldwide, driving value for our shareholders.”

Earlier this year, Televisa and Univision unified their development and production efforts, with Isaac Lee becoming chief content officer of both companies.

Televisa owns a significant stake in Univision, and is looking to take further control of the broadcaster. Azcárraga Jean holds a personal 5% stake.