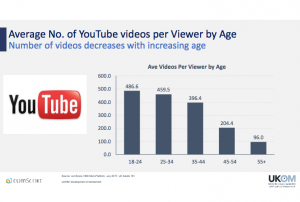 In the UK some 37.1 million adults watched an average of 311 videos each on YouTube during July, according to comScore stats.

The Video Metrix Multi-Platform study (VMX MP) – which claims to deliver a single, unduplicated measure of digital video consumption across devices – claims that 11.6 billion videos were watched on YouTube in total during the month.

ComScore found that the gender divide between YouTube viewers was equally split 49% female and 51% male – but that viewing skewed towards younger viewers.

The average number of YouTube videos watched per viewer also decreased with age. In the month people aged 18-24 watched a massive 486.6 videos each on average, compared to 96 videos per viewer among those aged 55 and over.

“It’s not surprising to hear that YouTube is oftentimes a daily destination for most millennials,” said the report.

“UKOM approved YouTube data from comScore, showcased that 11.6 billion videos were watched on the platform and 79% of videos were consumed on a mobile device in July 2017.”