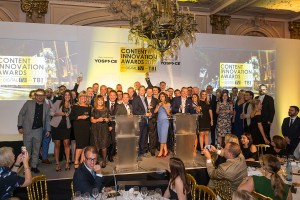 Over 200 people gathered in the Grand Salon of the Carlton Hotel to see 22 awards handed out to content producers, broadcasters, platform operators and technology companies that have excelled in innovation over the past year.

YouView took the prize for Advanced TV Innovation of the Year, while Vice Media won the prize for Best New Venture for its Viceland International channel.

Advanced TV Innovation of the Year

Best Series Launch of the Year

Channel of the Year

Entertainment Format of the Year

Factual TV Project of the Year

Winner: National Geographic Europe for Before The Flood

OTT TV Service of the Year

OTT TV Technology of the Year

TV Service Innovation of the Year

UHD Initiative of the Year