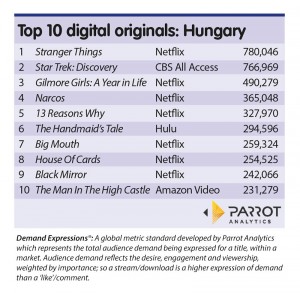 Netflix’s supernatural drama Stranger Things is currently the most in-demand digital original in Hungary, according to research outfit Parrot Analytics.

The show, which is due to return for a second series later this month, fended off rivals with more than 780,000 ‘demand expressions’ in a week where seven of the top 10 digital series originated on Netflix.

Gilmore Girls: A Year in the Life, Netflix’s reboot of the American comedy-drama – a show that originally ran on The WB and The CW between 2000 and 2007 – ranked third with 490,279 demand expressions.

The rest of the top ten was rounded out by Netflix’s Big Mouth, House of Cards and Black Mirror. Amazon’s The Man in the High Castle came in at number 10.

The Hungarian stats coincide with the Digital TV Central and Eastern Europe event, which runs this week in Budapest.