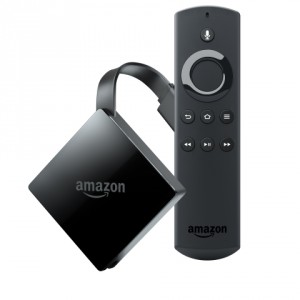 The new device, which will begin shipping to US customers on October 25, features a 1.5 Ghz quad-core processor and dual-band 802.11ac Wi-Fi. The new Fire TV also comes with 2GB of memory and 8 GB of storage.

Amazon said that it was working with the likes of  Hulu, Showtime, Sony’s PlayStation Vue, CBS All Access, NBC, Bravo, CNBC, and NBC News to add increased app functionality that lets users use their voice to rewind, fast forward, and play content with a wider range of commands.

The company said it was also working with partners to have single sign-on added to TV Everywhere apps such as ESPN, NBC, ABC, Disney Channel, AMC, CNNGo, Food Network, E!,Freeform, USA, and others.

Amazon has also added smart home camera support to the device, allowing customers to use Alexa to view streams from cameras throughout their home.

The e-retail giant has launched a number of promotional offers for the launch.

For a limited time, customers can get the all-new Fire TV and Echo Dot together for US$79.99 or the Fire TV Stick and Echo Dot together for $59.99, which the company says represents a 33% saving. Eligible customers who purchase and activate the all-new Fire TV by November 15, 2017 will also receive two months of Hulu, a one month trial of Showtime, and a US$10 credit to rent or buy content from Amazon Video.

Amazon has also this week launched a new Amazon Echo smart home device for US$149.99 and a new Echo Spot devices for US$129.99.

“The all-new Fire TV delivers a great entertainment experience with the best picture quality on a Fire TV, 4K Ultra HD, HDR, and an unbeatable selection of content – all at an affordable price,” said Marc Whitten, vice-president, Amazon Fire TV.

“With Alexa, the new Fire TV makes it easier to navigate content and discover great movies and TV shows, all by using your voice.”