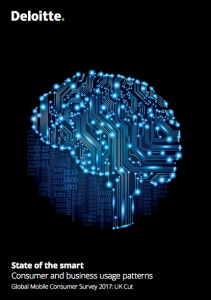 The proportion of UK adults watching video on their smartphones has risen fivefold in the past five years, according to research by Deloitte.

The consulting and accounting firm’s ‘Global Mobile Consumer Survey 2017: UK Cut’ report said that, as of mid-2017, some 57% of smartphone owners aged 18-75 watched at least one video on their smartphones each week – up from 18% five years earlier.

With smartphone ownership now at 85% among UK adults, compared to 52% in 2012, Deloitte said this implies about half of UK adults watched video on their smartphones in 2017 versus one in ten in 2012.

The ‘state of the smart: consumer and business usage’ report found short-form to be the main format of video consumed by smartphone owners.

Some 17% of UK smartphone owners said they watch short videos, live posts or stories at least once a day, while a further 23% do so at least once a week – however these numbers were much higher for young people.

Long-form video consumption was found to be “growing strongly” on smartphones, but is still far less frequent. In mid-2017 just 5% of 16-75 year-olds and 13% of 16-19 year-olds watched catch-up TV daily on their smartphones.

Roughly 16% of all smartphone owners aged 16-75 watched live TV on their smartphones once a week or more, but the study noted this is modest compared to live TV viewing in general.

“The smartphone is becoming more important for video,” said Dan Adams, UK lead partner for telecoms at Deloitte. “Mobile and fixed operators will need to ensure that their networks are configured to be able to cope with the expected demands that higher video consumption will place.

“As network bandwidth improves, video could increasingly be streamed into cars, buses and trains for passengers’ consumption, mirroring what has happened with audio streaming.”