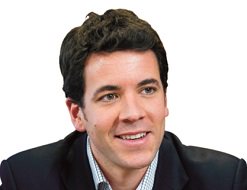 Pitts, who has worked at ITV for 17 years in various senior roles, is due to join the Scottish broadcaster’s board as chief executive on January 3, 2018.

His appointment comes after STV’s current CEO, Rob Woodward, said in April that he planned to step down within 12 months.

“After a thorough and rigorous search process we are delighted that Simon has agreed to join STV as Chief Executive Officer,” said chairman of STV Group, Baroness Margaret Ford.

“The combination of Simon’s sector experience, drive and track record in delivering strategic change make him an ideal candidate to lead STV’s next phase of growth. I am looking forward to working with him.”

Simon Pitts said: “I have got to know STV well during my time at ITV and I’m excited by the opportunity to lead a company with such a strong brand and relationship with its audience. I’m looking forward to working with everyone at STV to make the most of its great potential in the future.”

Pitts was reported to be in the running for the ITV top job after CEO Adam Crozier announced his exit earlier this year. However, Carolyn McCall, the CEO of low-cost airline EasyJet, was named Crozier’s successor last month.