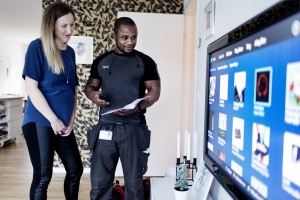 The year-on-year decline in TV customers amounted to 56,000, which the company said was in line with the overall market trend, with TDC retaining its share of the pay TV market.

CEO Pernille Erenbjerg said that the group aimed to slow down TV churn by integrating linear and OTT with more flexible packages while strongly pushing its set-top offering. She said the group would also be “focusing on premium content, an area were we have had good launches recently”.

TDC has now completed the merger of its TDC and YouSee brands.

The group’s revenues were down by 1.1% to DKK10.262 billion (€1.38 billion) in the first half, with growth in organic services revenue in Norway and growth in mobility services in Denmark being more than offset by declines in landline voice, TV and some other services in Denmark.

At the same time, capital expenditure increased, partly driven by the launch of a new YouSee TV set-top box and infrastructure investments.

TDC had 1.334 million TV customers at the end of June, down from 1.357 million in March, and down from 1.39 million in June last year. The share of revenue-generating units with an entry-level package stood at 33.8% in June. The proportion of ‘full-service’ TV customers with a set-top box increased slightly quarter-on-quarter to 31.4%. TV ARPU including transactional video-on-demand from the Blockbuster service was more or less flat at DKK257.

Norwegian subsidiary Get meanwhile lost 3,000 TV customers in the quarter, driven by increased competition and unbundling. Norwegian TV revenue however grew by 17.9% year-on-year to reach NOK851 million (€91 million), driven by the April launch of a new offering with premium content.

TDC’s total consumer revenue for the quarter amounted to DKK2.6 billion, down from DKK2.69 billion year-on-year, of which TV accounted for DKK1 billion.