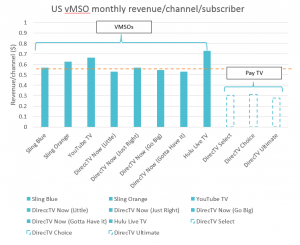 The new research claims there is “more money to go around” in the skinny pay TV bundle than in traditional US pay TV packages, making the switch to ‘virtual’ pay TV potentially lucrative for channels.

While the national average revenue per channel per customer for traditional pay TV is US$0.23 a month, virtual pay TV operators make a healthier US$0.59 per channel per month on average, according to the report.

Even removing the cost of carrying US national networks, the remaining revenue per channel for skinny bundle packages still stands at US$0.48, “more than double the average for traditional pay TV”, said Ampere’s research.

“US pay TV operators have needed to balance carriage fees and revenue for a long time. However, with the increasing migration of pay TV subscribers to OTT services, that balancing act is only set to become more precarious,” said Ampere Analysis research director, Guy Bisson.

“Despite the fees they are charged to include US networks in their streaming packages, vMSOs (virtual Multiple Systems Operators) have made a better job of reconciling the carriage fees versus revenues per channel equation.

“For channels, the shift to streaming and rise of vMSOs looks like a potentially strong plus – providing they have strong enough brands to make the cut.”