Netflix’s teen suicide drama 13 Reasons Why was the most ‘in-demand’ digital original in Germany in the second quarter of this year, supplanting Q1 favourite The Grand Tour, according to Parrot Analytics’ Global Demand Report for the second quarter. 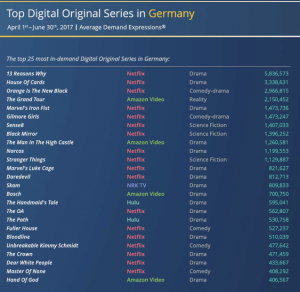 13 Reasons Why attracted an average of 5.837 million demand expressions in Q2. Amazon’s The Grand Tour, which topped the rankings in Germany in Q1, slipped to fourth place with an average of 2.15 million in Q2, according to Parrot. The Grand Tour did however see a spike in demand expressions in June following presenter Richard Hammond’s car crash while filming the latest series.

However, for the three months to June, Netflix dominated the top 25 most in-demand digital originals in the country in Parrot’s ranking, with House of Cards and Orange is The New Black taking the number two and three spots respectively.

Overall, Netflix took 18 of the top 25 slots in the list, with Amazon taking four – for The Grand Tour, The Man in the High Castle, Bosch and Hand of God.

Demand expressions for US police procedural drama Bosch jumped 528% when it was released in April. The show performed best in Germany according to Parrot’s ranking, only appearing in its top 25 in two other countries.

Amazon’s first German original, You Are Wanted, which was released in March, did not appear in Parrot’s top 25 in Q2.

Other non-Netflix originals in the top 25 list for Q2 included high-school drama Skam from Norway’s NRK. The series is officially geo-blocked for copyright reasons, but is evidently attracting interest in any case.

As part of a collaboration with Parrot Analytics, Digital TV Europe will provide regular updates on the most in-demand shows across key European markets, based on Parrot’s unique datasets.

Parrot’s Global Demand Report for the second quarter will be published next week.