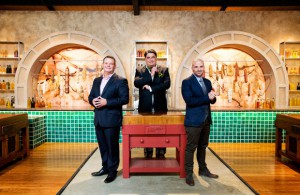 Various reports claim the international sales arm of US broadcaster CBS is the largest creditor of Ten, which is currently in administration.

CBSSI has made the claim to Ten’s administrators, which are currently looking at either a sale or recapitalisation plan for the commercial channel.

CBS, which has a major content output agreement in place with Ten and also co-operates network Eleven with the broadcaster, declined to comment this morning.

The Sydney Morning Herald reported Ten owes creditors A$129 million, with an accumulated loss of A$1.3 billion.

Endemol Shine Australia, which is part of the 21st Century Fox-backed Endemol Shine Group, is claiming A$12.4 million over series such as MasterChef, Offspring and Shark Tank.

Working Dog Productions, which makes game show Have You Been Paying Attention?, is claiming nearly A$5 million, while Neighbours prodco FremantleMedia Australia wants A$3.1 million.

I’m a Celebrity, Get Me Out of Here prodco ITV Studios Australia is looking for A$3.5 million, while around 190 employees are also making claims.

Ten’s current financial woes began when guarantors Lachlan Murdoch, Bruce Gordon and James Packer each opted not to back a new A$200 million loan.

KordaMentha was then brought in to oversee the company as it fell into administration, with PPB Advisory then taking over the process of securing Ten’s future.

Murdoch and Gordon are trying to jointly take over the network, which is Australia’s third-largest commercial channel, but local media laws currently stop them from doing so. Watchdogs are currently looking into their plan.

Murdoch, Gordon and Packer have allowed Ten to access a A$30 million pot, which means it can continue operating over the summer while a solution is found.