Ofcom: viewing habits between young and old is widening 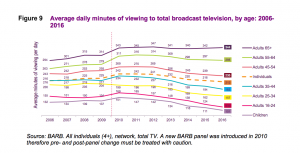 The gap between the viewing habits of the youngest and oldest audiences is widening, according to Ofcom’s latest research into public service broadcasting (PSB).

The UK broadcast regulator’s PSB Annual Report 2017 said that viewers aged 65 and over watched an average of 5 hours 44 minutes of broadcast TV on a TV set in 2016, just three minutes down compared to 2012.

“Between 2015 and 2016, average daily viewing among children and 16-24 year olds each fell by 10 minutes, whereas viewing by over-64s increased by two minutes,” according to the Ofcom report.

Ofcom noted that watching on-demand TV is “increasingly popular, especially among younger viewers”, but claimed that despite changing habits “oval viewing on the TV set is resilient”.

Each week 85% of people in the UK who have a TV in their home were found to watch public service channels from the BBC, ITV, Channel 4, Channel 5, STV and S4C.

However this marks a progressive decline over the past six years, with PSB reach dropping slightly each year since 2011 when it stood at 91%.

“The VOD services from broadcasters, including BBC iPlayer and ITV Hub, are the biggest players in the VOD market,” according to Ofcom.

“Less than half the number of adults who had used VOD in the previous week had used subscription VOD services like Netflix or Amazon Prime Video, or pay-per-view services like iTunes.”