European movies struggling to get on-demand despite SVOD boom

Despite strong growth in on-demand revenues, European movies are struggling to achieve VOD distribution, according to a new report by the European Audiovisual Observatory. The report noted that VOD aggregators are playing an increasingly prominent role in determining the make-up of on-demand catalogues. 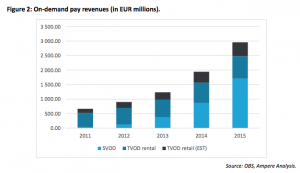 Total pay on-demand revenues in the EU grew by over half between 2014 and 2015, while subscription VOD revenues grew by over 95%, according to the VOD Distribution and the Role of Aggregators report.

While subscription VOD grew significantly, electronic sell-through lagged behind, according to the report. EST saw 28% growth between 2014-15, while VOD rental grew by a more modest 12%.

Despite the growth in on-demand revenues, these still accounted for only 3% of all audiovisual industry revenues at the end of the report period. According to the study, advertising was the biggest contributor to revenue in 2015, followed by pay TV revenues and public funding, with box office and physical video sales following some way behind – but still ahead of VOD.

European movies are still struggling to make it into on-demand catalogues. According to the European Audiovisual Observatory, only 47% of European films make it to TVOD catalogues, versus 87% of US films.

EU films represent 43% of all films in TVOD catalogues when counted on a unique basis – once per title – versus 41% for US films. However, when counting each occurrence of a film in all catalogues, the results are reversed, with EU films only making up 27% of the films, versus 59% for US productions, indicating that EU films tend to circulate less than US productions.

The report also found that VOD aggregators are playing an increasingly prominent role in the distribution chain. However, it noted that aggregators face a number of challenges, requiring scale to maximise revenues in a generally low-margin business where rights-holders are keen to maximise their own share of the available take.