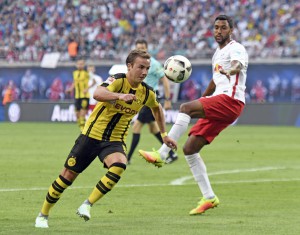 Liberty Global’s Swiss unit has secured a deal with Sky to offer the latter’s Bundesliga coverage via its recently launched MySports service.

Under the deal, all Bundesliga matches to which Sky Deutschland holds the rights will be shown exclusively on MySports in Switzerland via cable and IPTV.

The deal is a coup for Liberty Global in its battle for TV subscribers with Swisscom. The latter’s Teleclub service recently struck a deal with Discovery that will enable it to air the Bundesliga matches to which Discovery holds the rights for its Eurosport channels.

Swisscom will be the exclusive distribution partner of Eurosport Player, giving Swisscom and Teleclub subscribers access to the service.

However, Teleclub and Eurosport’s Bundesliga rights amounts to only 40 matches in total.

Liberty unveiled launched MySports as an entry into the premium sports market with rights to Swiss ice-hockey as its lynchpin asset. The service also provides cofgerage of US sports includihng NHL hockey. UPC Central Europe chief Eric Tveter made it clear in an interview with DTVE that he viewed the sports offering as a key competitive tool against Swisscom.

Steffi Buchli, Director of Programming, MySports said: “I am thrilled that as a new sports channel we can now also offer our customers this highlight of international football! We are taking our channel to the next level with this move and leaving our competitors on the Swiss sports TV market behind.” UPC and the 15 distribution partners will show all Bundesliga games on MySports for which Sky owns the rights – that is 572 Bundesliga and 2. Bundesliga matches per year in total.”