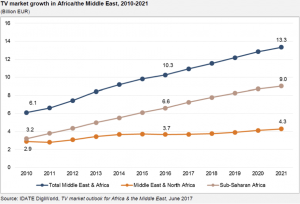 The TV market in the Middle East and Africa is set to grow by 30% between 2016-21, delivering revenues of €13.3 billion, according to research by IDATE.

According to IDATE, growth is being driven largely by sub-Saharan Africa, which it says will be the world’s fastest-growing TV market over the next five years.

The figures, which do not include Turkey and Israel, indicate average annual growth of 5.1%, with sub-Saharan Africa turning in the strongest performance with an average of 5.7% growth per annum. This would deliver a sub-Saharan TV market worth €9 billion in 2021.

TV growth is largely being driven by satellite. According to the research group, over 80% of households in the Middle East and North Africa receive TV via satellite, while the figure for sub-Saharan Africa is 40% and rising.

Alternative networks are progressing at a much slower pace. IDATE points to the slow development of digital-terrestrial broadcasting and argues that IPTV and cable networks will remain secondary, except in a small number of countries.

Cable and MMDS networks will continue to be used, despite a sometimes uncertain legal situation, in parts of central and West Africa, while IPTV is available in the Gulf States.

According to IDATE, the number of pay TV subscribers is set to virtually double in five years, alongside the rise of OTT video services.

These typically low-cost services are contributing, along with still massive levels of piracy in the region, to driving down the price of pay TV plans, according to the research group.

IDATE expects steady progress for pay TV services from a low base, but with subscriber growth outpacing revenue growth. Subscription video-on-demand services will grow alongside pay TV in the region, the company says.

Despite growth in pay TV, free-to-air television remains dominant, with only 14% of households subscribing to pay services in 2016.

IDATE says that the free TV business remains challenged by the underfunding of public channels, the uncertain financial situation of many private broadcasters and weakness in the advertising market, where growth is hindered by the lack of an homogenous audience measurement system. It nevertheless argues that untapped advertising revenue represents a source of potential future growth for these markets, especially in sub-Saharan Africa.