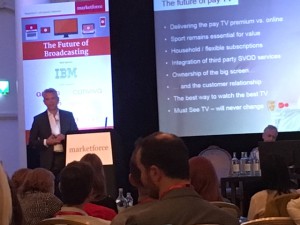 David Bouchier at The Future of Broadcasting

Only pay TV providers that aggregate multiple content providers together are likely to have a future, according to David Bouchier, chief digital entertainment officer, Virgin Media.

For younger audiences on-demand viewing is the norm, said Bouchier, but the majority still spend 83% of their time watching linear viewing.

Most on-demand content is time-shifted viewing. Driven by the younger segment, there is a “dramatic decline” in the number of hours recorded on DVRs as people switch to on-demand, he said.

“We have to provide a service…to both ends,” said Bouchier, in this “tale of two audiences”.

Bouchier said that Virgin had “to go in a different direction to its competitors” with TV. “We are talking about moving away from simple linear TV and that [old] multichannel line-up,” he said. “Linear is the old technology and…not a valid pay TV proposition on its own.”

Bouchier said “one brand is not enough”, meaning that Virgin has to provide a way for content partners to shift to an on-demand model. He cited the example of the Netflix app on Virgin’s platform, and the availability of on-demand viewing across screens on the platform, as showing the way ahead.

Bouchier said that Virgin’s ability to bring multiple content sources together in a bundle delivers value to consumers and provides something that individual service providers such as Netflix can’t match. He said that the large global subscription video-on-demand companies are learning “a difficult truth” that the customer relationship established by the likes of Virgin Media, as a provider of bundled services, is “sticky” and “powerful”. For Netflix and others, keeping customers is a challenging business.

“This [bundling] is core to our business. When you look at that fragmenting viewership…I am actually quite confident about where pay TV is going,” he said, arguing that no single online player offered sufficient value on its own. What Virgin needs to do is become “multi-service” player with market-leading broadband, he said.

Virgin’s strategy is therefore not to invest in content itself but to aggregate multiple service providers within a bundled offering.

Bouchier drew a distinction between Netflix and Amazon, which recently announced the launch of its Amazon Channels offering and appears to be competing directly as a pay TV aggregator in its own right.

“Netflix for us is a premium programming provider,” he said. “You can say that Amazon is a different proposition. Amazon’s main business activity is as a retailer. None of the big brands are there and none of the key content drivers are there,” he said. “If you are going to change the business model you have to get those premium content providers. They are not in a position to compete at the moment.”

Bouchier also said that Virgin Media is planning to ramp up its kids on-demand offering this summer, citing dis programming as one of the key pillars of a premium TV offering.

Bouchier said that Virgin Media had focused on balancing “the best TV with the best way to watch TV”, building on its superior network.

“In short order we will be able to accelerate away into the realm of 10Gbps,” he said. “The connectivity we offer will be used by all content suppliers, wither it is 4K or virtual gaming.”

Referring to the issue of a split in its audience between younger and older viewers, Bouchier said that Virgin had to offer both a new way of navigating content and a more traditional linear line-up for now.

“We have to do both…because of the schism in the audience”, he said. The operator’s new V6 box enables on-demand while its six tuners prevent recording conflicts for more traditional viewers, he said.

Bouchier said that aggregating content in a fragmented way is not enough on its own. In the panel session that followed his presentation, Bouchier said that Virgin Media has “an issue” with the BBC wanting to force people to go into iPlayer to view on-demand content, while it also wanted better access to Netflix’s metadata in order to better integrate the service with it TiVo content discovery platform.