The BBC needs to respond to the fragmentation of audiences and the emergence of global competition by focusing on its online presence, developing “world-class creativity” and ensuring that its finances are stable, according to Bal Samra, the UK public broadcaster’s group commercial director. 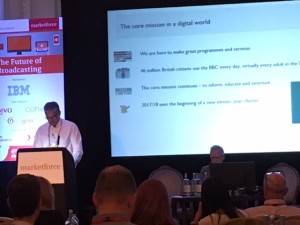 Bal Samra at The Future of Broadcasting

In this environment, said Samra, the BBC needs to focus on three things: to be part of the online world, to develop world class creativity, and to ensure financial stability.

In terms of its presence in the online world, BBC iPlayer has built a huge audience, he said, adding that the inclusion of live content online would be crucial for the future. Adding personalization and encouraging participation is a key priority, by growing the active signed-in user base, he said.

“This approach will help us build a deeper two way relationship with audiences,” he said.

Samra said, that despite earlier criticism, BBC 3 was now an online success story. Taking this further, the BBC had to deliver news on mobile first, he said.

In terms of talent, Samra said that the BBC had to better reflect the make-up of the UK and that it had to compete for world-class talent.

Samra said that “the BBC also has to get most out of our finances”. The move of BBC Studios into the commercial side of the business is one example of a shift that will provide opportunities, he said.