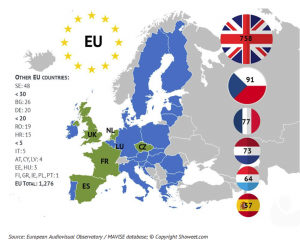 One third of all TV channels and video-on-demand services in the EU specifically target foreign markets, according to a report by the European Audiovisual Observatory.

According to the report, the relevant services belonged to 44 parent companies, 26 of which were of European origin, 15 of US origin, and three of ‘other’ origin.

According to the European Audiovisual Observatory, the market power of these channels is significant in a number of cases. In seven European countries ­­– Hungary, the Netherlands, Sweden, the French Community of Belgium and Denmark, the French-speaking part of Switzerland and Norway – the cumulated audience market share for targeted TV services was greater than 20% of the overall audience market share.

The UK is by far the leading European hub for linear and on-demand audiovisual services targeting foreign markets. Other major hubs for both types of services include the Czech Republic, the Netherlands and Luxembourg.

The UK is home to 758 TV channels primarily targeting other markets, compared with 91 in the Czech Republic, the second largest source.

The UK also houses 152 on-demand services primarily targeting other markets, compared with 64 in the Netherlands, the number two provider, and 30 in Ireland. 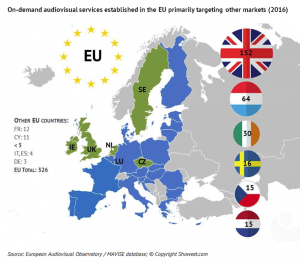 The EU was home to 4,063 TV services and 2,207 VOD services, including catch-up services, last year. Half of these were concentrated in the UK, France and Germany. About one in 10 services was a public broadcast service, and about a third of services were in the HD format.

One fifth of television services established in the EU were accessible via digital terrestrial television, and the rest via cable, satellite, or internet protocol television. The majority of television channels were pay and/or premium services while 30% were available free-to-air.

Catch-up TV and free-on-demand accounted for 71% of the total number of on-demand services.