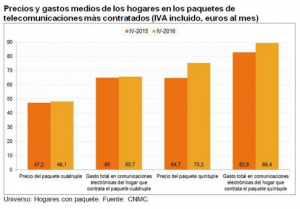 Spanish households were paying almost €90 a month for ‘quintuple-play’ services – bundles that include fixed and mobile telephony, fixed and mobile broadband, and pay TV – at the end of 2016, according to regulator the CNMC.

According the watchdog’s household panel, the average expenditure by households on electronic communications services soared by 8% in the course of the year, up from €82.40 in 2015. 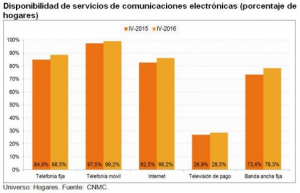 Some 78.3% of Spanish homes had fixed broadband internet services at the end of the period, up from 73.4%.

In terms of broadband technology – at least in terms of consumer perceptions about the type of service they received – fibre grew fastest, with 42.2% of homes reporting they had a fibre connection at the of the perod, up from 29.6%. Some 48.5% of homes said they had ADSL or VDSL services, down from 57.7%.

Only 12.6% of homes said they received a cable service, down from 13.7%. About 1.6% said they took ‘other’ types of broadband, while 4.9% did not know what type of internet service they received.