YouTube and BBC are dominant video apps on UK phones

YouTube and BBC iPlayer dominate the range of apps used by UK consumers to watch video on their smartphones, according to research carried out for mobile retailer Carphone Warehouse. 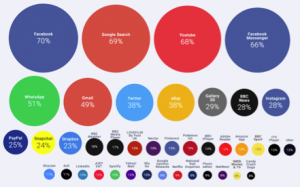 Some 68% of UK consumers have YouTube apps installed on their phone, making it the third most downloaded app overall. Combined, the BBC Media Player and iPlayer apps are on 31% of phones, beating rival broadcast apps ITV Player, on 12% of phones, All4, on 11%, and Sky Go, on 10%.

Netflix’s app is only downloaded on 9% of phones, beaten by the Lovefilm by Post app for renting DVDs, still present on 15% of phones in the UK.

Other video content-related apps on UK phones include the IMDB app, on 8%.

Eighteen to 24 year-olds are the most likely to use video streaming apps, with 30% using them.