The US’s new wave of OTT TV ‘skinny bundle’ providers could amass 3.5 million subscribers by the end of this year, further eating into the base of established pay TV providers, according to Ampere Analysis. 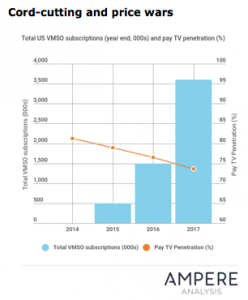 In a study of ‘virtual multiple system operators’ (VMSOs), Ampere contends that a new raft of services charging as little as US$20 a month for slimmer channel line-ups could offer a more direct competitive challenge to cable and satellite TV players than Netflix and Amazon.

While some VMSOs, such as Dish Network’s Sling TV and AT&T’s DirecTV Now, are actually backed by pay TV providers, others, such as Sony’s PlayStation Vue, Google’s YouTube TV and Hulu’s Live TV offer an outright competitive challenge.

With VMSOs predicted to appeal to 25-44 year-olds in particular, and to appeal to cord-cutters as well as cord-nevers, Ampere Analysis forecasts that pay TV penetration will drop below 70% before 2020. Household pay TV penetration dropped below 80% in Q3 2015 in the US and continues to decline, reaching 76.5% at the end of 2016, the research outfit said.

According to Ampere’s recent US consumer survey, almost half of US internet users said hey could see their household no longer watching broadcast TV in the next five years. Half are already using online video services as the main way to watch TV.

Ampere said that VMSOs can address the 60% of US broadband households that had internet speeds of 10Mbps or more at the end of 2016. While the prevalence of 24-month pay TV contracts in the US means VMSOs must fight to win subscribers in these first few years, and wrestle customers from incumbents, the skinny bundle providers have the advantage of lower acquisition costs. However, one downside of their model, based on shorter contract periods, is that VMSO subscribers can switch easily between services.

Toby Holleran, Analyst at Ampere Analysis said: “Longer-term, we believe that the rapid growth in the VMSO market will offset the continuing decline in traditional pay TV subscriptions. But it’s not all good news for channel owners as VMSOs’ focus on low cost means that many smaller thematic channels are left by the wayside. We also expect the competition from VMSOs to push down pay TV pricing and have particular effect on those operators who don’t own their own broadband infrastructure – so are unable to adapt broadband and bundle pricing to compensate for decreasing TV ARPUs.”