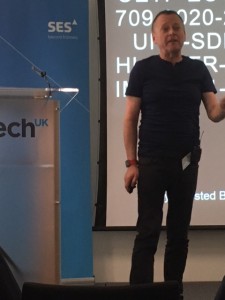 A combination of High Dynamic Range (HDR) and Wider Colour Gamut (WCG), rather than higher resolution and higher frame rates (HFR), will be the key to the success of UHD TV, and the BBC will adopt technologies that ensure all its licence fee payers are able to view the content it produces, according to Andy Quested, the BBC’s HD and UHD head of technology.

Speaking at the SES UHD Conference in London yesterday, Quested said all BBC UHD programmes would be in wide colour space and HDR. However, he said, this did not mean that all programmes would also be made in HFR.

Addressing HDR, Quested that all BBC commissions would be in the Hybrid Log Gamma (HLG), the technology developed jointly by the UK public broadcaster and its Japanese equivalent NHK, while co-productions could be in HLG and Perpetual Quantizer (PQ), the SMPTE HDR standard. Quested said that programmes acquired from third-party providers would generally be in the PQ format. However, all BBC distribution of HDR content will be in the HLG format, he said.

Quested that the BBC would “not disenfranchise licence fee payers” as it moved into UHD by adopting formats that could not be displayed on their TV screens.

Quested said that current screen sizes common in most homes meant that 4K resolution was not enough on its own to make much of a difference. “Resolution is not enough. How many people are going to move their sofas forward?” he said. Quested also said that WCG on its own “does not really give you enough” to make a significant difference to the TV viewing experience. The key, he said. Is “WCG plus HDR”, which “works for all content”.

On top of WCG and HDR, however, Quested said audio is also important. He said he believed that ‘three-dimensional audio’ would be a key part of the UHD experience, enabled by the adoption of soundbars as a complement to ultra-thin screens. “What is going to make it happen is [the sale of] flat screens that don’t have space for speakers. You will need soundbars,” he said.

Quested contended that there is currently no real linear channel in UHD TV in the UK, and said that Sky, which has launched a service, has effectively created a channel that is ‘live on-demand’ without the infrastructure in place to support a real live linear service.

With regards to its own content, Quested said that the BBC would focus on natural history in UHD first. However, many new dramas would be filmed in UHD as well, he said. “This stuff is available. Once there is revenue is there [UHD] will happen,” he said.

He said that he expected UHD would sit alongside HD and SD services and that there would likely be a “mixed environment” of different formats in the future, with no “single service” predominating.

Quested introduced his presentation at the SES UHD Conference with a discussion of flagship natural history programme Planet Earth II, the BBC’s first mainstream foray into UHD. He said that it was key for the BBC that PEII should have as long a lifespan as PEI, which is still selling well internationally after 10 years.

Comparing the show to its predecessor, the first Planet Earth, Quested said that in 2003, the BBC had opted for a Varicam using DVCPro100 as a workhorse device, replacing HDR Super16. PE1 had been the first natural history show to be filmed on DVCPro100 tape, as opposed to film.

Quested said that natural history was “tough” to shoot, with a need for equipment that can survive extreme conditions. “Things have to work because you can’t come back [to these locations] quickly,” he said.

He said that post-production workflows had been transformed and radically simplified, with a much greater degree of automation, to accommodate HDR and WCG. He said that the workflow for the next big natural history series would be simplified further by even more automation.

“People will only get involved where they make decisions about what appears on screen,” he said.