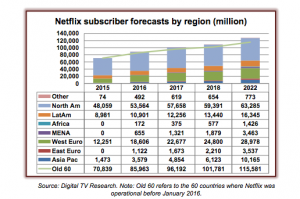 Netflix’s subscriber count is tipped to reach 128 million by 2022, with the number of international viewers expected to exceed those in the US by early 2018.

This is according to a new study by Digital TV Research, which predicts that Netflix’s overall subscriber number will climb by 44% between the end of 2016 and 2022 – with subscriber increases expected across all geographical regions.

In Asia Pacific, Netflix’s subscriber count is expected to almost triple from 3.6 million subscribers in 2016 to 10.2 million in 2022. In Latin America numbers the figure is tipped to rise from 10.9 million to 16.3 million.

“Furthermore, Digital TV Research believes that Netflix will fall foul of Russian legislation. Due to be introduced in July 2017, this restricts foreign companies to only 20% of digital platforms’ equity.”

Netflix established a global presence in January 2016, after it launched in 130 more countries – including across Africa and Eastern Europe.

Digital TV Research estimates that these countries accounted for 3 million subscribers at the end of 2016, with this due to rise to 14 million by 2022 – some 11% of Netflix’s global total.

The 60 countries that Netflix had a footprint in before January 2016 are expected to provide 90% of revenues in 2022, though Asia Pacific is expected to quadruple its revenues to more than US$1 billion.