TV holds its own as Spanish media usage evolves

Spaniards are continuing to use the TV as the major device for the consumption of audiovisual content, according to the latest survey of media habits by regulator the CNMC.

Tablets are the least popular devices for audiovisual consumption, with people spending on average 0.3 hours viewing audiovisual content on these device on weekdays and 0.4 hours at weekends.

The figures, which have varied little over the last year, according to the regulator, disguise significant differences in the habits of different age groups. 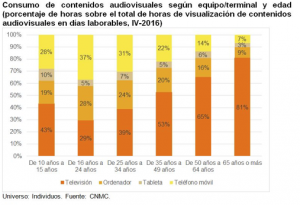 Some 82% of Spaniards use the internet, up six points year-on-year. Some 10.1% access the web via TV, up two points on last year. However, the mobile phone is the internet device of choice for people, with 83.5% using their phones to surf the web. This compares with the 53% who use laptops, 43.3% who use desktops, 37.3% who use tables and 6.1% who use game consoles.