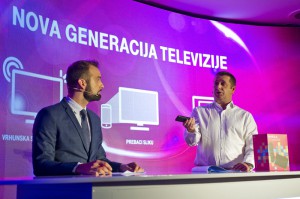 The operator said that the revamped service would include more interactive functionality across screens, with a new personalised TV interface.

The service will integrate the main MAXtv service with mobile TV offeing MAXtv, allowing viewers to switch seamlessly between screens. The upgraded mobile app will enable subscribers to use their mobile phones as remote controls for the main TV and to transfer content from mobile to the larger screen.

Users will have access to the service across three screens – the TV, mobile devices and PCs – via a single account, providing catch-up, on-demand and linear TV.

As part of the relaunch, T-Hrvatski Telekom is providing a new set-top box to all subscribers. the new platform will see the number of channels for which catch-up functionality extended, with a new recommendation system configured to learn from users’ viewing habits.

Richard Brešković, T-Hrvatski Telekom’s marketing director for residential customers, said that the next-generation service was “another major step in improving the user experience of our users”. He said that the service set “a new standard in the market” by offering a seamless experience across multiple screens.

T-Hrvatski Telekom’s upgrade of its TV service comes against the background of a strategic move by Deutsche Telekom to create a standardised ‘multi-tenancy’ digital TV platform based on two standard set-top models across its CEE footproint and to provide a cloud-based user interface to serve older legacy boxes.

At the Digital TV CEE conference in Budapest in October, Thomas Staneker, head of TV, technical service centre at Deutsche Telekom-owned Magyar Telekom told Digital TV Europe that a single back-end platform based on this multi-tenancy model would allow multiple services to be delivered with local variations from the same common network, and that Telekom planned to standardise its set-tops across the region, focusing on a zapper box and a ‘DVR-ready’ model that may not include an integrated hard disk drive.

T-Hrvatski Telekom already offered a network DVR service, which enabled it to provide an advanced TV service without the expense of deploying a hard-drive-enabled box, but the service lacked certain important functionality such as pause live TV capability.