Ampere: Over 55s failing to see attractions of SVOD 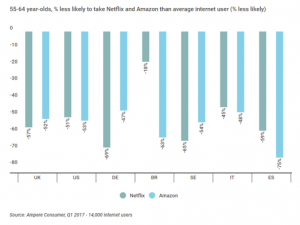 Over 55s are not tuning in to subscription video-on-demand, even though they have embraced catch-up on-demand services from free-to-air broadcasters, according to research by Ampere Analysis.

According to Ampere, viewers in this age group, unlike younger segments, prefer to watch shows on TV sets rather than smartphones and tablets, with 80% of viewing in evening primetime hours being done on a TV.

In the UK, only 13% of the 55-64 year-old group view Netflix in the month covered by the survey, and 8% use Amazon. However, 53% watched BBC iPlayer in the period covered by the study, while 34% watched IPTV Hub, numbers similar to the national average. Some 19% watched All4, compared to 28% of ll viewers, and 17% watched My5 compared to 18% of all viewers.

“Older viewers are often an overlooked audience segment, despite representing a fifth of target viewers – and a sixth of all adults – and an increasingly wealthy portion of the population,” said Richard Broughton, director of Ampere Analysis.

“Smart TV penetration is reasonably high amongst this group, and they are using the broadcasters’ catch-up services already, so it should be possible to encourage them to take SVoD services. The key to understanding the dynamics of this hugely varied group is to get the content offer, package, price and message right and introduce them to the world of SVoD. Content suiting the genre interests of this group – such as Netflix’s The Crown – is already beginning to filter through to services and will do much to improve the saleability of SVoD to this audience.”