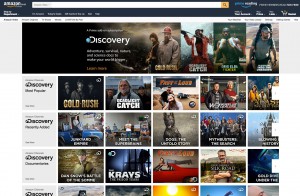 Amazon has launched its Amazon Channels offering in the UK, Germany and Austria, allowing Prime users to add live and on-demand TV as part of their subscription package.

Amazon Channels launches with a line-up of more than 40 channels in the UK and more than 25 in Germany and Austria, with Amazon promising more additions in the coming months.

Prime members can add channel subscriptions for a monthly subscription fee, available individually without the need to sign up for a bundle or enter a long-term contract.

The move marks the European debut of Amazon’s premium channel offering, after it rolled out a similar scheme in the US in 2015 after teaming up with major TV networks and content makers like Showtime, Starz and AMC.

“From live sport to Bollywood, arthouse cinema to reality TV, and award-winning TV shows from popular channels like Discovery and ITV, Amazon Channels gives power back to customers to choose exactly what they want to watch,” said Alex Green, MD, Europe, Amazon Channels.

Amazon Channels is designed to let users pay for what they want to watch from a single Prime Video app and Amazon account, with the ability to search, browse and get recommendations across all their subscription channels.

In the UK, the per-month price to access Amazon’s line-up of channels ranges from £1.49 for a service like Panna, a cooking course and recipe channel, to £9.99 per-month for Daily Burn, with offers live and on-demand fitness workouts.

“The ITV Hub is all about giving viewers more choice about how and when they access their favourite ITV shows, including watching without the ads via ITV Hub+,” said Simon Pitts, ITV managing director, online, pay and interactive.

Commenting on the Amazon Channels launch in Europe, CCS Insight analyst and director of multiplay and media, Paolo Pescatore, described it as a “highly disruptive move” and one that could “threaten Sky’s dominance in the pay TV market both in the UK and Germany”.

“Beyond free to air services, the addition of Discovery’s channels is hugely significant,” said Pescatore. “This is the first time that its channels have been made available outside of the Sky universe and out of a bundle.

“In our opinion, this will force many households to think twice about their pay TV subscription and cut the cord as we’ve seen in the US. Especially if Amazon will add more live TV such as sports in the future.”

DTVE first reported in July 2016 that Amazon was planning to launch its channels outside of the US, after we uncovered a string of job posts claiming Amazon will be launching “similar services in Europe” – with fluency in English and German listed as two of the basic qualifications.