Showmax partners with Play in Poland 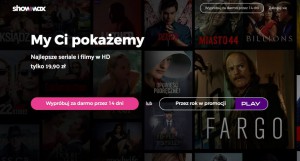 All new and existing Play contract customers will get free access to Showmax, which launched its internet TV offering in Poland in February.

The agreement will make Showmax available to some 8 million Play customers and is part of Showmax’s plan to accelerate the rollout of the service in Poland.

“The level of interest in Showmax since our launch in Poland earlier this year has exceeded even our most optimistic estimates,” said Showmax CEO, John Kotsaftis.

“The Play transaction is a big deal for us because it gives us instant access to millions of customers and I’m hoping will help us build on the great start we’ve already had in the country.”

Showmax offers a localised offering in Poland that includes Polish short films and series. The firm has offices in Warsaw and former Google executive Maciej Sojka leads its local operations.

“Our strategy runs deeper than light-touch localisation. We’ve built our business in Poland around the premise that success requires having boots on the ground, having a deep understanding of customer needs, and having a willingness to make more than cosmetic changes to meet those needs,” said Kotsaftis.

“We’ve made good progress by partnering with incredibly talented local producers and directors, and it’s great to now expand that partnership approach and work with one of the leading mobile networks.”

Showmax first launched in August 2015 in South Africa, and is now available in more than 60 countries. Viewers can access the service across much of Africa and Europe, as well in the US, Canada, Australia, New Zealand and Indonesia.