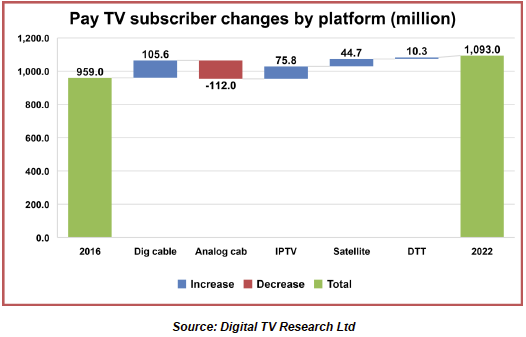 The global number of pay TV subscribers will rise by 134 million between 2016 and 2022 driven largely by gains in Asia Pacific, according to Digital TV Research.

The Asia Pacific region is tipped to add 92 million subscribers between 2016 and 2022, while Sub-Saharan Africa is expected to double its total.

“Doom mongers in the US have been predicting the demise of pay TV for some time. Although the US is losing pay TV subs, there is still a lot of life left in the sector. Furthermore, they are ignoring the rest of the world,” said Digital TV Research principal analyst, Simon Murray.

“We believe that the worst of the losses in now over for North America, with ‘only’ 5 million fewer subscribers forecast between 2016 and 2022.”

In total, Digital TV Research predicts that pay TV subscriber numbers will fall in 18 countries but will double in 26 countries between 2016 and 2022.